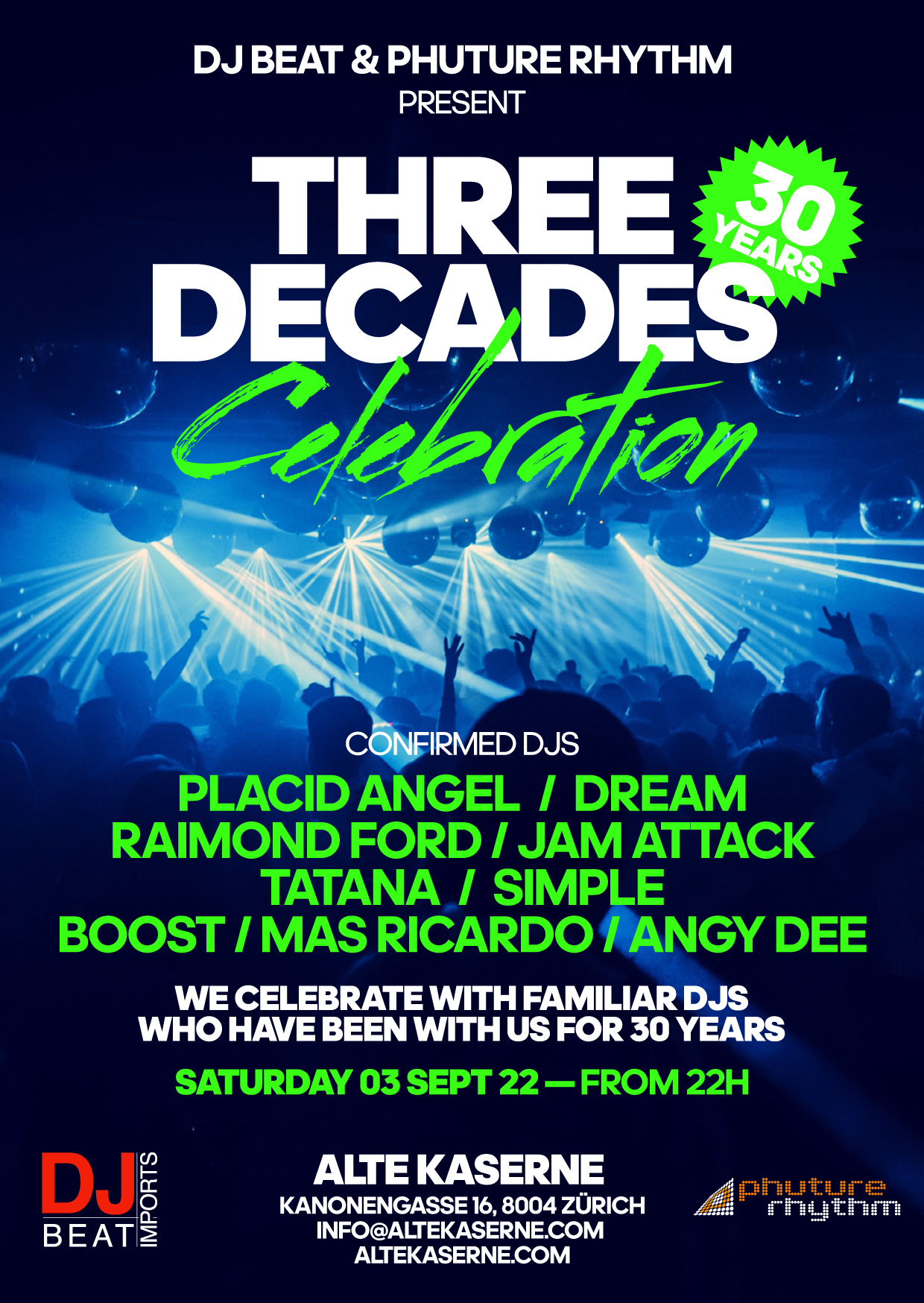 And yes, it's been 30 years since DJ BEAT, the world famous record store of Nino Taglialatela (DJ Placid Angel / Tito Torres), opened stores in Switzerland and Ibiza. So many DJs went there to buy vinyl and so many DJs worked there as vinyl sellers. It was always a good opportunity to meet the DJs and exchange a few words outside the events. Which is no longer possible with the new online stores. Well, times are changing, but it's also nice to have memories.
Phuture Rhythm: These events in the techno, trance & house scene quickly found their following and the desired crowd in Zurich and the surrounding area. After many successful nights in clubs such as Grodonia Rumlang, Ex-it, Arena Spreitenbach, Studio Urdorf or even Oxa, Pino Quaresima, in collaboration with Tiziano Donvito, decided to take over the iconic club Magic Factory in Schlieren.

From 1994 to almost 1998, Club Magic Factory was a real rave club with international guest appearances, such as FAITHLESS, ROBERT MILES, JAYDEE, PAUL VAN DYK, GIANNI PARRINI and many more. At this time, national newcomer DJs also discovered a passion for this music, such as TATANA, EDX and LADY TOM. The resident DJs were FANTASY, ILLUSION and S. I. ONE. DJ ENERGY, SNOWMAN, MIND-X, and WILLOW were also regular visitors. The club also had a popular house dance floor called "BACKSTAGE". Also in the house section with popular DJs like DJAIMIN, MR. MIKE, DANI KÖNIG, GOGO, DEEPER DEE, LOU LAMAR and resident DJ SOUL SEDUCTION.

Then, in the late 90s, a new era began at the then famous Club Dillons in Zurich. After renovation, Pino Quaresima and Enrico Lenardis opened the club under a new name. Dillons became D-Lite Globale Clubbing. The perfect location for more unforgettable nights of techno, trance & house. A year later, Branco Narancic also joined the clubbing team. Thus the three of them created a place where many people found a second home at the weekend. The D-Lite opened on Friday evenings and only closed its doors again on Monday mornings at 10 am. That meant 60 hours of non-stop music. With 5 dance floors and hundreds of national and international DJs and guests, the weekend was always a highlight. It's just a shame that the club was closed down by the authorities a few years later, and with the demolition of the building, an era definitely came to an end. Fortunately, REMEMBER PARTIES still exists today.